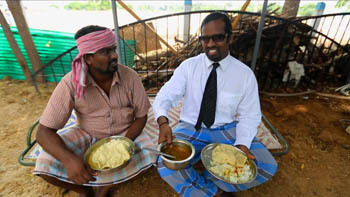 Eating Habit of the Rural and Urban People of Bangladesh: The rural people in Bangladesh usually have their meals in the morning, at noon and. at night. The urban people also take three meals a day. But there. are some differences in their eating habits. Rural people are in the habit of eating a heavy meal. Rural people eat more. On the contrary, urban people do not- depend on heavy food. They also eat less than rural people.

The rural people usually eat rice and gur or rice with some, other food items for breakfast. They eat much because they work in. the fields. They do not eat anything before lunch. They also eat chira, khai and mud at breakfast. On the other hand, the urban people take bread vegetables, etc. Again some take Parata and egg and some take loaves and banana. Those who are old take a little breakfast.

However, there are some differences in the food habit and meal times of the rural and the urban people in Bangladesh.