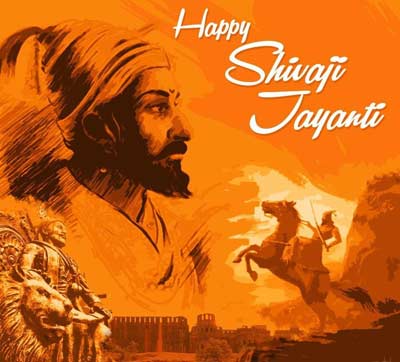 Shivaji Jayanti is the festival of showering gratitude on one of the bravest rulers of India, Chatrapati Shivaji Maharaj. He founded the Maratha kingdom by standing up against the Mughal emperor Aurangzeb.

Every year 19 February on the occasion of Shivaji Maharaj’s birthday this festival is celebrated. People of Maharashtra celebrate this day on a grand scale to remember the great deeds done by the legendary ruler.

This occasion bears a great importance to the people of Maharashtra. So they celebrate this day with all the efforts they can give to make it most rememberable.

This festival is celebrated in a small extent outside Maharashtra. People of Goa and Karnataka also celebrate this day with great respect. The government organize different programmes. This occasion is also known as Shiv Jayanti as the Marathis remembered him as God Shiv.

After 1870, Shivaji Jayanti expanded on a large scale. During British oppression, Bal Gangadhar Tilak worked to unite people through Shivaji Jayanti. Babasaheb Ambedkar continued the festival in the 20th century and he became the president of Shiv Jayanti festival twice.

The history of Shivaji Jayanti started in 1870 and the trend is still ongoing. The government of Maharashtra gives every effort to celebrate the day by following every ancient way.

Why do we celebrate Shivaji Jayanti?

Shivaji was the warrior king and founder of the Maratha nation. His full name is Shivaji Bhosale. He was born on 19 February 1630 at Shivneri fort, Ahmadnagar Sultanate (currently known as Maharashtra, India).

Shivaji seized the Toma fort at an early age of 16. He had seized the Rajgad and Kondana forts by the time he was of 17 years. He significantly expanded the Maratha empire through guerilla tactics and his tactics continued till 1676.

He revived the ancient Hindu political traditions and court conventions. He also promoted the use of Marathi and Sanskrit language instead of Persian language in court and administration.

He took some activities with the emergence of the Indian independence movement as many people considered him as a proto-nationalist and hero of the Hindus. In Maharashtra, there are some debates over his history and sometimes created violence among some groups.

However, He was crowned as Chatrapati ( emperor ) of his realm Raigad in 1674. He died on 3rd April 1680 at the age of 50 at Raigad fort. Till now he is regarded as a great warrior and also a great civil administrator.

His greatness and good deeds are still alive in the minds of every Maharashtrian and other Indians. To remember and show respect to his great deeds, his birthday is celebrated every year as Shivaji Jayanti on a big scale in India, especially in Maharashtra.

When do we celebrate Shivaji Jayanti?

It is celebrated both on 19th February, the birthday of Shivaji and on Phalgun Krishna Paksha Tritiya (the 3rd dark phase day of the Hindu month Phalgu ). Scholars have two different opinions about the date. But 19 February is accepted by the government of Maharashtra.

Customs and traditions of Shiv Jayanti

This day is celebrated very extensively in the regions of Goa, Maharashtra and Karnataka. There are many public buildings in Maharashtra on his name as they consider him as a demigod. Different activities are arranged by the government. Yet many have questions about how to celebrate Shivaji Jayanti.

This day is celebrated with many colourful parades and public shows (dramas, stage presentations, puppet shows) resembling his life. Chatrapati Shivaji Maharaj speech in Marathi is given by prominent government officials on this day.

Check out these collections of photos related to the Shivaji Jayanti celebration, attires of the king and other accessories with descriptions. Hopefully, you will found the right pictures.

Here you will find status and quotes about Shivaji Jayanti in different languages like Hindi, Marathi, English. So check out these collections to know-how is the quality.

“If a tree which is not a highly elevated living entity, can be so tolerant and merciful to give sweet mangoes even when hit by anyone; being a king, Should I not be more merciful and tolerant than the tree?”

“Verily Islam and Hinduism are terms of contrast. They are used by the true divine painter for blending the colours and filling in the outlines. If it is a mosque, the call to prayer is chanted in remembrance of him. If it is a temple, the bells are rung in yearning for him alone”

“Of all the rights of women, the greatest is the mother”

“Even if there were a sword in the hands of everyone, it is will power that establishes a government”

Shivaji Jayanti SMS. Sms is the easiest way to express our feelings and if it is any occasion then, it is the best method to wish each other. Shivaji Jayanti is one of the festivals where we want to wish our close ones.

Wish your friends, neighbors, relatives through SMS on this occasion of Shivaji Maharaj Jayanti. Here are some SMS in Hindi, Marathi and English related to Shivaji Jayanti. Check out if these collections can help you any bit.

Is it (Shivaji Jayanti) a public holiday?

Shivaji Jayanti is a festival of great importance for the Indians, specially Marathis. Yet it’s an optional holiday for the Indians. Most offices and businesses remain open. Some give the opportunities to celebrate it with family.

Employment and holiday laws in India allow employees to choose a limited number of holidays from the list of optional holidays. This system gives individuals the opportunity to take time off to celebrate religious festivals.

People of Maharashtra have great regard for Chatrapati Shivaji as he founded Maharashtra in the 17th century. They exhibit their gratitude towards Shivaji by celebrating his birthday as Shivaji Jayanti.

Shivaji Maharaj is the idol of rulers and soldiers of the present time. He had a great mind of the construction of medieval India. He was also successful in uniting the several Marathi chiefs which teaches us the importance of unity.