You are here: Home / Story / THE INSTANT WIT OF NASSIRUDDIN HOJJA

The story about Nassirudding Hojja: One-day Nassiruddin Hojja was mending a hole on the top of his two storey house. Suddenly, he saw that someone was calling him from below. He looked down and saw a man there. The man said, “I have come from quite a far off place. Please get down and listen to me.”Hojja thought that the man had some important thing to say to him.

So, he came down from the roof soon and wanted to know what the man wanted to say. The man sought some financial help from him. At this Hojja became very angry. But he did not show any sign of anger to him. He decided to teach him a good lesson. He told the man to climb up the stair with him.

When they both reached the roof, Hojja said, “Sorry, I no have money to help you.” The man became very and asked him. “Why have you made me climb up the stairs only to say that you don’t furious have any money.”

Hojja instantly replied, “Why have you made me climb all the way down the stairs only to ask for money instead of shouting from lie low?” 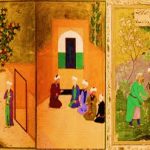 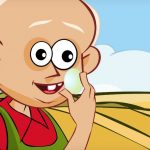