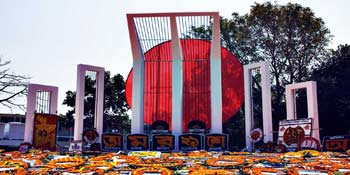 Shahid Minar Pictures. The Shahid Minar, also known as Shaheed Minar or Martyr Monument, is a national monument of Bangladesh. It was established to pay tribute to those who were killed during the Bangla Language Movement in 1952.

The Shahid Minar is placed near Dhaka Medical College Hospital and in the Dhaka University area.

The central Shaheed Minar of Dhaka 14 meters in height which were built with marble stones. The marble floor was designed to reveal the moving shadows of the columns. The basement including 1500 square foot represents the history of the Language Movement of Bangladesh. It was designed by Hamidur Rahman. It built on Modern architectural style.

The Shohid Minar has a great significance in the cultural and social structure of Bangladesh. At present, National and cultural activities held every year centered on the shahid Minar.

The Images of Shahid Minar are shared on 21 February. The day has great significance. Shahid Minar Images are here below-

Facebook is a social media network. It is now used worldwide mostly Bengalis use is to share their thoughts. 21 February is our International Mother Language Day. We pay homage on Shaheed Minar on that day. So, Most of Bengali look for to download Shahid Minar Art. There they are on below:

Scroll back to top