Only by getting a suggestion, you can’t do well in the exam. You need to practice for the exam. That’s why we here provided a JSC English Question so that you can practice it well. This question is made after researching a long time. We are hoping it to come maximum common in the JSC Exam.

There are so many students look for JSC English Model Question 2020, this post is for them also. We really do a hard work on this question. If you follow this you can do a better result in the exam.

This English Question of JSC is of 100 marks which includes English 1st Paper and English 2nd Paper. It also contains the writing part.

You can look on – JSC English Suggestion of All Education Board.

Read the text and answer questions 1 and 2.

Once upon a time, a dove and a bat were very good friends. One day the two friends decided to set out on a journey. They flew over the rivers and hills and came to a big jungle. Both the friends were very tired, they needed to sit down It started to and take a rest. Soon night fell and it was dark all around. A storm rose rain heavily. The dove and the bat started to look for a shelter. They came upon a century old rain tree. An owl had his nest in that tree. The dove and the bat knocked at the owl’s door. The old grumpy owl opened the door. The dove and the bat requested him to give them shelter The ow unwillingly let them in. The two birds were hungry too. They begged for some food. The selfish owl was not happy. However, he shared his dinner with them. The dove was so tired that she could hardly eat But the bat was sly. He ate greedily. He began to praise the owl with the thought of getting more food The bat said. “O wise and brave owl. you are the most generous person I have ever seen. You are powerful and mighty. The owl was very pleased at the bat’s flattery. He puffed and ruffled himself trying to look as wise and brave as possible. Then he turned to the dove and asked. “Now little dove

what do you think about me?”

1. Choose the best answer from the alternatives.

i) How did the owl let them in?
a) enthusiastically b) reluctantly c) Passively d) hopelessly
ii) What is the meaning of “hardly”?
a) strongly b) firstly c) barely d ) often
iii) Which one is the synonmy of ‘grumpy’?
a) harsh b) old c) irritable d) backward

iv) How did it rain?
a) profusely b) with lightning c) intermittently d) poured
v) How was the owl?
a) wise b) strong c) covetous d) self-seeking
vi) How was the bat?
a) convincing b) shrewd c) wise d) fast
vii) What did the bat do to convince the owl?
a) elude the owl b) prise the owl c) bribe the owl d) adulate the owl

(a) Describe the Journey of the dove and the bat.
(b) How was the night?
(c) Describe the owl
(d) How did the bat flatter the owl?

3. Read the following text and fill in the gaps with appropriate words to make it a meaningful one.

Nakshi Kantha is a kind of a)____ quilt. The name was taken from the Bengali word, ‘naksha’ which means b)_____ pattern. It is a kind of traditional craft and is said to be c)____ to Bangladesh and West Bengal in India. The art has been practiced in rural Bengal for centuries. The name ‘Nakshi Kantha’ gained d)_____ after the poet Jasimuddin’s e)___ of the poem ‘Nakshi Kanthar Math’ in 1929.

Read the following text an aswer questions 4 and 5.

Our national poet Kazi Nazrul Islam was born on 24 May, 1899. His father died when he was only nine years old. So, he had to start a very struggling life from his very childhood. Nazrul completed his primary eduction in 1909 and joined a loca maktab as a teacher in the same year. Nazrul again got himself admitted in Mathrun School of Bardwan in class six. But he could not prosecute his studies for financial crisis and left for Asansole. He had to work there for his livelihood in a bread factory. In Asansole he came in conact with a police sub-inspector, Kazi Rafizullah. Nazrul requested him to make arrangements for his education. In 1914, Kazi Rafizullah sent Nazrul to his village home at Kazirshimla in Mymenshingh. There he got admitted in Darirampur High Schol in class seven. Nazrul read in that school only for one year and left Kazirshimla. On returning home, Nazrul got himself admitted in Raniganj Searsole Raj School in class eight in 1915 and continued his studies till 1917. While he was a student of class ten in 1917, he joined the army putting an end to his formal education.

4. Complete the grid below with appropriate information.

5. Read the passage again and write, whether the statements are true or false. Give correct answer, if the statement is false.

a) Nazrul ws eleven years old when his father died.
b) He had to struggle after his father’s death.
c) Nazrul joined a local maktab after completing secondary education.
d) Kazi Nazrul Islam studied up to class eight.
e) He had to work in Kolkata for his livelihood in a factory.

6. Read the text below and fill in the gaps using the clues given in he boxes. There are more words than necessary. One word can be used once only.

Education for girls is essential for the development in all a)____ of the society. So, investments in the education of b)____ will bring in greater c)___ in the field of economic and social d)____ Educated women can contribute more to the family e)___ than those who have no schooling. Educated f)___ are more likely to send their g)____ to school and look after their health and nutrition. Thus h)___ women can contribute to the i)____ development. On the other hand, failure to educate women is a tremendous j)___ of human resource.

7. Read the text below and fill in the gaps using suitable words to make it a meaningful text.

8. Match the part of sentences from columns A and B to make five complete sentences.

9. Read the text below and fill in the gaps with the root words in the brackets adding suitable suffix, prefix or both.

Yoga is a kind of posture and breathing exercise. It helps you get a)(relax). It puts b)(emphasize) on diet and c)(meditate). If you practise yoga, you have to be a regulr d)(practice). Then you will have the e)(potent) health benefits. Remember that the practice of yoga needs your f)(concentrate). Yoga is g)(use) for stress h)(manage). It imporves i) (fit)_ and benefits people who are j)(weight).

10. Fill in the gaps in the following text with appropriate articles (a, an or the). Put a cross (x) where no article is needed.

When a)____ great poet, Ferdousi, began to write b)____ Shanama, the sultan promised him c)___ piece of gold for each d)___ verse. When e)___ epic was finished, it contained sixty thousand f)____ verses. Instead of giving gold coins, he offered the poet only sixty thousand silver g)___ coins. The poet refused to take the silver coins and left the court with h)____ broken heart. He was i)____ aggrieved man. Later on, the sultan realized that he had made j)____ blunder.

11. Change the following sentences as directed in the brackets.

a) Kazi Nazrul Islam is greater than all other porets in Bengali literature. (Negative)
b) He is known as a rebel poet. (active)
c) He was born into a very poor family. (Intrrogative)
d) But his poverty could not destroy his creativity. (Passive)
e) His writings are very encouraging for us. (Exclamatory)

12. Rewrite the following passage changing the form of speech.

The girl said to the teacher, Sir, I shall be greatful if you kindly lend me the book your praised highly in the classroom yesterday.” The teacher said, “I have become really happy to know that you are eager to read this book. You are welcome to take any of my book that you like.” “Thank you sir,” said the girl. “You are welcome.” said the teacher.

13. Use capital letters and punctuation marks as needed in the following passage.

dhaka is the capital and largest city of bangladesh todays dahak has a long story of evolution was founded during the 10th century it served as the mughal capital of bengal from 1608 to 1760 before coming under british rule in 1765 it was a trading center for british, french and futch colonialism.

14. Suppose, you re Tamim/Tamima and your friend is Farid/Farida. Now write a dialogue between two friends on how to make a good result.

15. Suppose you are Adib. Now, write an email to your penfriend Tasvi about the natural beauty of Bangladesh. You may send the email to [email protected]

16. Write a paragraph of 150 words on “A Book Fair”. Your writing should address the following questions.

a) What is a book fair?
b) When and where was it held?
c)Why did you go there?
d)What was your feeling after the visit?

Hope this post on Lekahpora.org about JSC English Question with help a lot in practice English in Class 8. Need more, comment us.

Get JSC Result 2020 with Marksheet

Get your JSC Result Now!!! 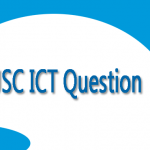